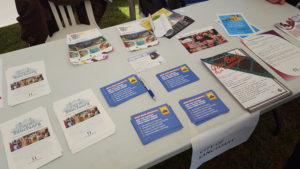 The Plymouth City of Sanctuary (PCoS) was officially launched during refugee week on the 19th June 2019 and it was widely attended by members of the public, individuals, organisations and the local authority represented by Councillor Sue Dann. The Plymouth City Council (PCC) kicked off the signing of the pledge by choosing to put the “Refugees are welcome” signs across their office premises.

The first event of the refugee week celebration in Plymouth was the Hope Festival on the 15th June organised by Plymouth Hope which took place at Brickfields Sports Centre. They agreed to designate a table stand for the Plymouth City of Sanctuary group and received parcels on our behalf from the national team for our Launch & the LifttheBan campaign materials from Asylum matters. The event was a particularly successful one as we had people signing postcards on the spot, others took some away and others had the postcards displayed on their stands. There was an overall positive and widespread support for our campaign by members of the community present at the event. 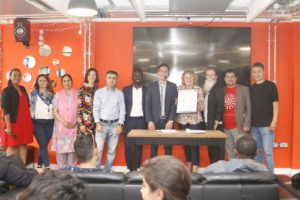 The launch which was on Wednesday 19th June started with our hosts Mohammed and Liliane welcoming City of Sanctuary Trustee Jeff Morgan to introduce the movement to the audience. Next up we had two of our members give a powerful speech about their journey through the Asylum-Seeking process namely Gunel Ismikhanova and Elyas Gheyasi. Then we had the Plymouth City Council represented by Councillor Sue Dann give a speech about the local authority’s commitment to welcoming asylum seekers to the city and officially sign the pledge to make Plymouth a welcoming city. After that, we had the Plymouth City of Sanctuary Steering Group welcomed on to the stage, together with Jeff Morgan and the Councillor Sue Dann take a picture to officially launch the movement. Finally, we took and answered some questions from the audience to close a successful evening on a high. 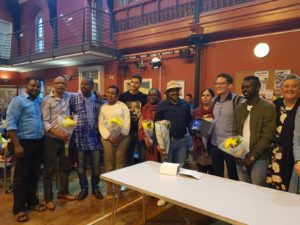 We have had several members of the public, stakeholders and organisations reach out to support the PCoS movement and be a part of it. We had received several offers of support from providing venues, to cycling courses and bicycle schemes, campaign support and most importantly key staffs of the University of Plymouth committing to becoming a University of Sanctuary.

Finally, on Friday 21st June, the last day of the Refugee week we had participated in the Cultural Kitchen Open House Event organised by START – Student and Refugees Together. Surprisingly, the PCoS steering group’s contribution to Plymouth had already been noted thus we were honoured and pleasantly surprised to have been awarded the Advocacy Award for speaking up for sanctuary seekers in Plymouth. This award was shared with the Give Back Project who is also committed to supporting sanctuary seekers in the community and had allowed us to share their venue for the official Launch of the PCoS group.